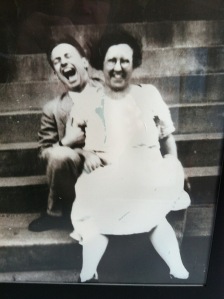 A writing prompt group I belong to threw out a suggestion about the aromas we remember from previous Thanksgivings. Perhaps it was from the fumes of paint stripper as I worked on a new writing desk that made me grab onto the subject and take time to ponder my response. After doing so, other memories from decades past bubbled to the surface and a face came into focus of one I hadn’t really thought of for a long, long time…perhaps too long.

As l remember, her salt and pepper hair was always pulled back in tightly pinned bun. After all, she lived on a farm and wearing one’s hair down just wasn’t done. It wasn’t practical and if my grandmother was anything, she was definitely practical. Every black and white Polaroid showed a taciturn woman, a pair of wire-rimmed spectacles perched on a less than feminine  nose, wearing a plain, cotton house dress typical of the 40’s, 50’s and 60’s that ended mid-calf and covered a thick pair of stockings rolled to just below her knees. The only words to describe the shoes she always wore are black, blocky and durable. I believe they were called “Cuban” shoes but definitely capable of trudging through the muck typical of a working farm. To complete the ensemble, Grandmother always wore a top to bottom apron, a virtual necessity of that era, which covered a range of duties from holding freshly laid eggs to protecting her frock from flour during bread making. Most importantly, the apron covered her ample bosom.

Legend has it, my grandmother’s ample girth and bosum hid untold treasures which was later confirmed by my older sister many years later. As the story goes, there lived a woman on the outskirts of town who, to put it delicately, serviced interested gentlemen in the county. Perhaps she was beginning to feel the time had come to pack up and move along but whatever the reason, she came to the decision to sell her forty acre parcel. My grandmother was a shrewd business woman who knew a good investment when she saw one. They decided to meet and while their two attorneys were hashing out details in the parlor, my grandmother and the woman came to a mutual and satisfactory conclusion, sealing the deal with a handshake in the kitchen over a glass of buttermilk. Then my grandmother reached into her bosum and pulled out the agreed upon sum of cash. I shouldn’t be surprised. I’m sure her bosum was safer than the bank.

Truth is my grandmother had been widowed far too early in her marriage: a difficult and frightening situation in a town of about 150. By all accounts she remained stoic and faced the adversity the only way she knew how; with determination, pragmatism and a no-nonsense view of the world. That particular era seemed to be in short supply of warm and fuzzy emotions so I’m sure it couldn’t have been all roses for my father yet he possessed a delightful prankish sense of humor.  Looking closely once again at an old photograph of her, I swear I could finally see a little mischievousness in her eyes too. Perhaps there was more to this woman I always remembered as flinty and slightly distant.

As I continued sanding and stripping, a particular memory slowly came inching back. A visit to my Grandmother’s farm was the closest thing to bliss in my youth. There were pigs and dairy cows along with a stern warning to stay clear of both. She had three devoted Chows, two of which never left her side while the third, a teddy bear with a thick black coat joined me on my adventures. An abundance of bullfrogs and crawdads filled the creek that sliced through the pasture. She always seemed to have a new litter of barn kittens darting out and about the barn sheds. When the mood struck, I would leap on my pony with two lead ropes attached to the halter and ride into town for a cream soda at Pearl’s mercantile. I usually ended up tossing feed to the chickens and the two turkeys in the backyard. On this visit, however, the turkeys were conspicuously absent.

My mother called me in to wash up and a mixture of heavenly aromas hit me as I walked up the back stairs. It wasn’t until I saw my grandmother stand up in front of the cookstove that I mentioned the missing turkeys. Wiping her hands in her apron she didn’t immediately respond but did manage to block the opening. My mother shot my father a guarded look which I didn’t catch but before he could spill the beans about the truth of our guest of honor, my grandmother spoke up, explaining turkeys often wandered off for days at a time. “I’m sure they’ll return by the time you come for your next visit.” I must have taken her explanation at face value for nothing more was said.  She gave my shoulder a little squeeze before shooing me off into the living room to play Chinese Checkers.

Sitting down for Thanksgiving supper at a table covered with a vast array of the most delicious looking vegetables about twenty minutes later, a plate with a slab of ham was placed in front of me. In fact, everyone was served ham. If anyone had thought to question the menu, she must have silenced them with a warning gaze over my head. Maybe she didn’t approach every situation with knife edged bluntness. Perhaps time, age and life had taught her a little levity and holding on to childhood innocence a bit longer to be more important. As the memory came inching back, I’m certain of it.

I look at those old family photographs differently, especially those of my grandmother.  Yep. There was much more to that lady than she let on.

Hope everyone’s memories from holidays past bring a slow smile to your lips. Happy Thanksgiving everyone!