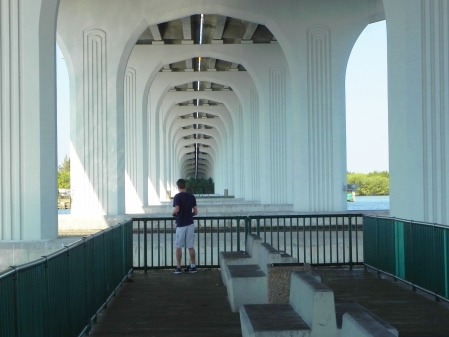 re sometimes difficult for our son. It’s not that he doesn’t like being with family, he does. But his cousins, being quite older, have families of their own, leaving our son, the youngest by decades, kind of stuck with the old farts. In an effort to make sure he got to enjoy some of the pastimes he would like, we went fishing this morning. In fact, his uncle joined in. Frankly, I wasn’t sure said son would arise at an early hour but, surprisingly he did and we were on our way before 8am.

Promising to meet us at the bait shop, we took off before the uncle because, of course, I needed to indulge in my morning coffee. By the time we arrived at the bait shop ten minutes later, his uncle had not only purchased the proper hooks but a cupful of live bait (shrimp) as well. I have to acknowledge my gratitude at this point. I’m not a fisherman and the idea of skewering a cute little tiny shrimp wasn’t appealing at all.

Without driving all over the island, we decided to walk underneath the bridge and find a spot near the murky waters surrounding the concrete pilings. Besides two other fishing folks, we were the only ones. It was quiet, calm and the waters gently lapped the platform underneath. Having successfully baited the hook, my son cast as far as he was capable into the water We waited……and waited…..and waited some more. Casual conversation occupied our time as we waited for some unsuspecting fish to snap up the the shrimp. Behind my brother in law and my son, I noticed what appeared to be a floating boulder, which of course, was impossible. The boulder turned out to be a 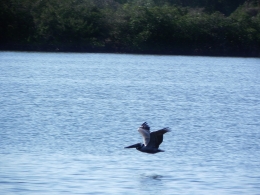 couple of manatees making their way upstream. I would like to proclaim I captured their progress as they meandered upstream but I couldn’t get my camera set up in time. Suffice it to say, they are quite impressive.

Snappers seemed to be toying with my son as they breached the surface several times opposite of the location where my son was fishing. I even spotted on leaping almost twelve inches above the water. Of course, we decided to change our location, try a fresh shrimp and cast a little further out. During this waiting period,  I managed to capture a pelican in flight along with one preening his wings. All the while, my son and his uncle chatted nonchalantly. No nibbles, no tugs, nothing, nada, zip.

The snappers had moved to the other side of the bridge or at least their decoys had. Once again, my son moved to where they were making their existence known and once again, we switched bait and regrouped. After another forty minutes, he called it quits but unwittingly gained experience of learning patience. Patience is not his strong suit, nor apparently of teenagers in general these days. He’d garnered no fish, had only seen the manatee as it began to dive, hadn 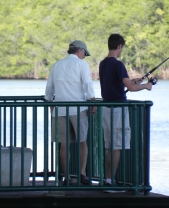 ‘t had a single nibble and other than witness a nearby flying pelican, the morning had been a dismal failure. But he came away feeling the time had been well spent.

There had been no text messages. He and his uncle had enjoyed a rare camaraderie. Baiting the hook hadn’t been nearly as gross as he anticipated and there’s just something mystical about early mornings, quiet fishing holes and the serene sound of water. It’s an imaginary throwback to the adventures of Huck Finn. In any case, what he did capture was a little slice of heaven he could tuck into his memory bank.